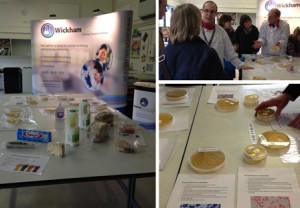 On Saturday (23.03.2013) Wickham Laboratories participated in a local community event called S.T.E.M. Festival taking place at Bohunt School, Liphook. It was organised as part of National Science and Engineering week and its aim was to educate the next generation of young people about exciting opportunities and careers existing in Science, Technology, Engineering and Maths industries. The event gathered over 1,000 visitors who turned out to be very keen on learning and absorbing new information about various companies and their activities.
Wickham Laboratories had three delegates attending the event: Technical Director, Business Development Manager and a Marketing representative. The company’s stand and exhibition attracted over 200 people who were interested in a career in Microbiology. They had a chance to see some of bacteria responsible for food poisoning on Petri dishes, results of experiment demonstrating the amount of microorganisms growing on unwashed hands, hands washed with soap and water, and hands rinsed with antibacterial gel, as well as examples of ‘when food goes bad’ and ‘when food goes good’ explaining the difference between positive and negative effect of bacteria presence in food on human’s health.
The event can be classified as successful despite the difficult weather conditions. Wickham Laboratories would be more than happy to take an active part in the next year’s S.T.E.M. festival and any other similar events in the future.